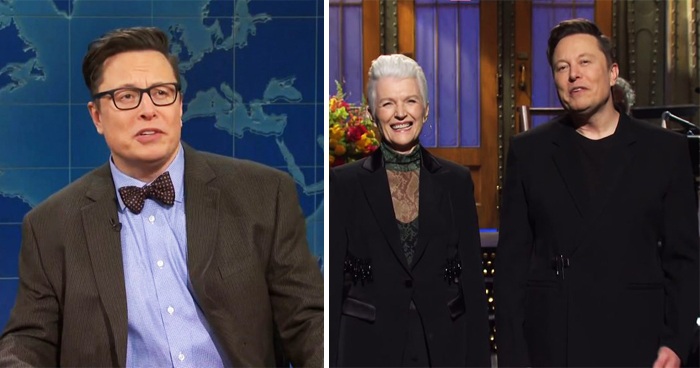 Elon Musk was invited as the SNL’s host last Saturday and revealed personal information/achievement while participating in funny sketches. In the show, Elon Musk also revealed that he’s the first-ever with Asperger’s Syndrome to host Saturday Night Live, or at least the first to admit it in his opening monologue.

Elon Musk invited his mother, Maye, as it was Mother’s Day.

“I’m excited for my Mother’s Day gift. I just hope it’s not Dogecoin,” Maye said to her son.

While Elon Musk said it is, Dogecoin’s price took quite a drop to as far as 20% lower.

Elon Musk built up tension and expectations as he shared who are invited to the show.

Addressing the weird things he says and tweets at times, Elon said, “Look, I know I sometimes say or post strange things, but that’s just how my brain works.”

“To anyone I’ve offended, I want to say: I reinvented electric cars, and I’m sending humans to Mars on a rocket ship. Did you also think I was going to be a chill, normal dude?”

Elon Musk played the doctor delivering the bad news to a group of worried teens about their friend.

He also appeared in another sketch called ‘Ooli Show’ as the producer, Ragnarok. The sketch has him hilariously profess his undying love for the host.

A striking resemblance of cosplay to a certain character from a certain popular movie.

Musk also played ‘Wario’ attending a court hearing as the suspect to other characters’ death. His girlfriend, Grimes also joins him.

Musk appearance in the show appears to be controversial to other long-running cast members. They dug at each other on social media, but it remained as a popular episode.

Chad went on a mission to save the Mars colony during a solar storm here in another hilarious cinematic segment featuring Miley Cyrus.

On another hilarious segment, Elon Musk attended a post-pandemic party where he tried to hit a conversation with fellow partygoers.

This episode remains one of the most anticipated with Elon Musk’s appearance!