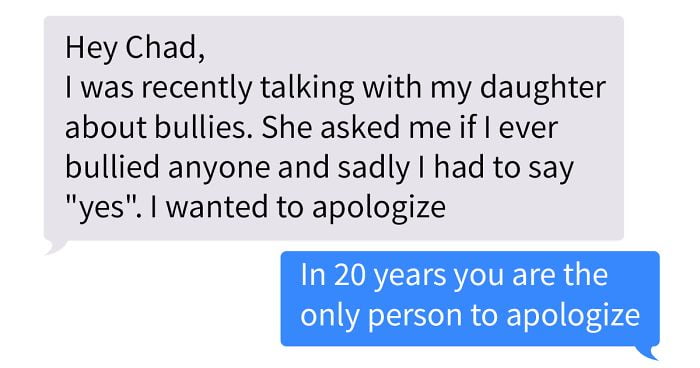 Dad Has To Tell His Daughter He Was A Bully At School, He Apologized To His Victim 20 Years Later

Many of us must have either been a victim of bullies at school or might have even been in the shoes of bullies at a point in our lives. A victim or bully, it can be quite difficult to forget what had transpired, no matter how many years go by.

The lesson of a heartwarming story has, however, portrayed that apologies for having bullied someone do matter a lot. Just when Louie Amundson’s 10-Year-Old daughter questioned him if he had ever bullied someone before, he replied saying ‘YES.’

His response prompted him to contact his victim, Chad Morrisette, a student he once teased and was mean to back in Junior High School. Fortunately, Chad accepted his apology and both he and Louie felt much better than before. The emotional weight got lifted off both shoulders.

An Ex-School Bully Apologized To His Victim

Heart-touching stories like this one can help restore one’s faith in humanity. Interestingly, it portrays that an apology is important and also has the power to heal.

The main point is, bullying is a complicated issue and cannot be settled by just telling victims to stand up for themselves or by stopping what they’re doing.

It’s a behavioral issue that requires a lot of help and understanding that bullies might be lashing out because of the serious problems faced at school and at home. In an interview with 8,850 people, Ditch The Label revealed that about half of the people admitted to having been bullied before their 20th birthday. On the other hand, 14% admitted to having been bullies themselves.

It Took 20years For The Apology To Occur, But It Was Very Much Appreciated

Here’s A Video Of The Pair Reuniting

And How People Reacted: