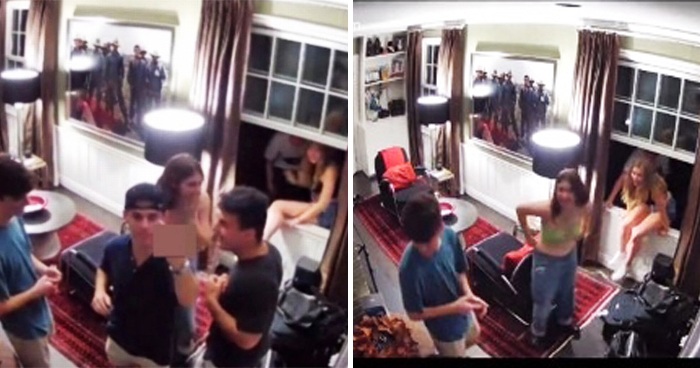 If you’ve got technological-savvy parents, do brace up your mind for the occurrence of the unexpected more often. In particular, a dad has recently gone viral for the stunt pulled on his partying son, who tried to sneak friends back into the house. This dad, as perceived knew his son would be out late, so he decided to play a joke that will teach him a lesson; the whole stunt was captured on a home security camera.

@Rhythmlessman set up a trap for his son when he snuck out with friends for a night out.

The dad, whose name on TikTok is Rhythmlessman, explained that late into the night, a window slides opened and his son named Jesse could be seen climbing through before a crowd of people followed. As the group was gathering, the lights turn on, then Alexa read out a message from the dad.

In the clip shared on TikTok,  several teenagers were seen quietly climb into the house through a window.

That was fun. Thanks, Alexa, for the assist! ##fypage ##parenting ##teenager ##college @shortking.com

A few seconds in, the lights turn on, and Alexa recited a pre-programmed message from @Rhythmlessman.

The message read: “Hi Jesse, next time say you want to go out, so you don’t need to climb through a window with all your friends. I hope you had fun, were sage, and didn’t c**p your pants when I started talking. I may go viral on TikTok for this; thanks for the content.” Having listened to the message, many of Jesse’s friends busted into laughter, but he confronted his dad through the camera security while raising his middle finger.

The message (as highlighted above) shocked the sneaky party-goers before they burst into giggles.

Jesse responded: “F**k you, I love you, I love you. No, look at me. I love you, but f**k you.” So far, the clip has been watched over 20 million times and had been captioned: “When you watch your son and his friends sneak out, you kinda have to f**k with them when they return.” Without holding back, people couldn’t hide their opinions in the comment section. But many questioned Jesse’s behavior.

Here’s How People Reacted In The Comments

A user who was concern about Jesse’s language to his dad wrote: “Some people have a close enough relationship with their parents that they can curse at them, and the parents don’t mind unless it’s serious. This wasn’t.” Another wrote: “You should have switched the lights red, made them flash, and had a deep voice say, “intruder alert, police have been alerted, weapons activated.” A third said: “How many people was he bringing back? Damn”