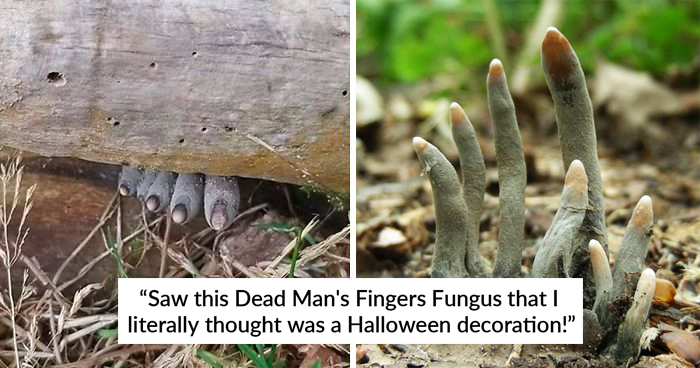 A Facebook group called Mushroomcore, has nearly 30,000 mushroom lovers who share all kinds of cool photos and stories of fungi. However, some species continue to surprise even the biggest nature lovers.

In June, Regan Daniels from North Carolina uploaded a few pictures to the group of what looked to be a body part of a corpse saying, “Saw this Dead Man’s Fingers (or toes in this case) fungus that I literally thought was a Halloween decoration!” Her photos instantly went viral, and a few people even said they were fake. But Daniels reassured people they weren’t.

The Dead Man’s Fingers is a fairly common species in Britain and Ireland, and is also found throughout mainland Europe and in many parts of North America. The fungus isn’t generally considered edible. But you wouldn’t even consider it in your meal for its odd looks.

“I found the mushroom in Western North Carolina in the United States at a park that I frequent,” Reagan said. This mushroom had sprouted alongside other species of mushrooms on a tree stump pretty much hidden in the park.

The Dead Man’s Fingers appears throughout the year at the base of beechwood stumps and occasionally on other buried hardwoods. It usually arises in tufts of three to six ‘fingers’ that are often bent and give the impression of arthritic black knuckles. You might call the police at first sight.