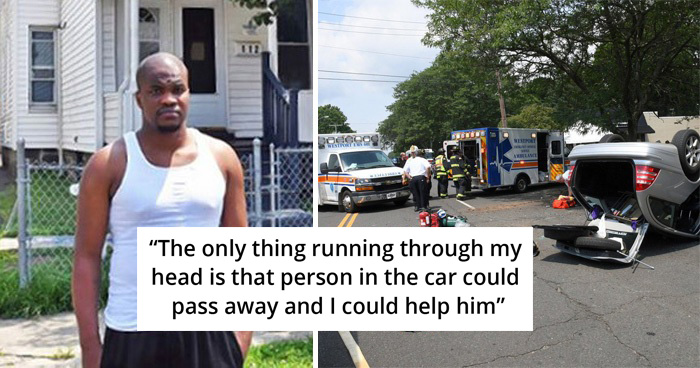 Self-sacrifice is one of the most highly prized qualities in today’s world. Luckily, a few people still have it, behaving selflessly and having empathy towards strangers. But then, what does it take to save a life? Aaron Tucker had experienced tough times, and just when things appeared to turn around for the Connecticut-based, he was faced with a difficult choice. Tucker was precisely on his way to a job interview in hopes of changing his life, having served nearly two years in prison.

Aaron Tucker having served nearly two years in prison was on his way to a job interview when he was faced with a difficult choice: Save a life or proceed.

He had hopped on a public transportation bus near a halfway house in Bridgeport, where he’s been living after serving a sentence for a weapons charge. The bus was traveling through Westport when Tucker witnessed a severe car crash that left the vehicle overturned.

Without hesitation and despite the bus driver telling him he wouldn’t be able to get back on, Tucker jumped off the bus, rushed to the scene, and saved the accident victim. He was supposed to drop off at Dinosaur Bar-B-Que, a local restaurant, for the interview.

Without hesitation, Tucker jumped off the bus traveling through Westport, rushed to the scene, and saved the accident victim

A Westport car crash turns strangers into heroes — including a Bridgeport man who used his shirt as a tourniquet https://t.co/c1NDkDjksx pic.twitter.com/bReGrAJaRI

“I got up around 5 a.m. because I was so excited for the interview,” Tucker told NY Daily News. With just $2 in his pocket, he left his home around 9 a.m. before boarding a crowded bus. He added: “I looked up and saw a car flipped over right in front of the bus, so I ran to try to jump out of the bus.”

“I said I was going to help him and asked the driver if he was going to wait for me, and he said, no, I am going to leave you. I saw a lot of smoke coming from the car, and I just jumped off the bus and ran to the car.”

Tucker and some nearby people pulled the injured driver from the wrecked car. He kept the bleeding driver calm and covered the man’s head with his shirt

Tucker and some nearby people eventually pulled the injured driver from the wrecked car. He kept the bleeding driver calm and covered the man’s head with his shirt before being transported to a local hospital. “Your family wants to see you. Keep your eyes open.” Tucker reportedly kept saying to the driver.

He continued: “I just wanted to make sure he was all right, and that’s what I did. It dint go through my head because a job can come and go, but life is only one time; the only thing running through my head is that person in the car could pass away, and I could help him.”

“Your family wants to see you. Keep your eyes open.” Tucker kept saying to the driver

Emergency personnel dubbed Tucker a hero, and he has since been offered multiple job offers by various employers in construction and at a rubber factory. In response to the flooding offers, Tucker claims it isn’t about what people could for him but about saving the man’s life.

In all, his wish was to get his son to live with him. “I know that if I continue to work, I am going to get a job because I am not going to go without supporting my son and raising my son to be happy.” However, a crowdfunding page was created for the dad-of-one, and it raised over $50,000 in just a few days after the incident.