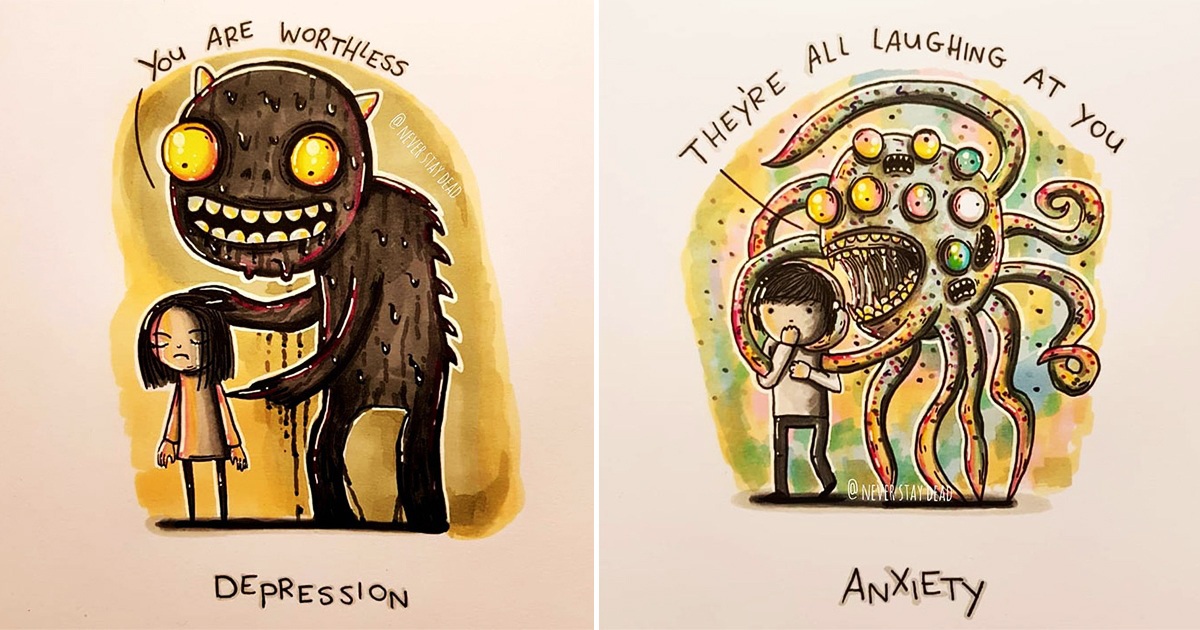 It’s extremely difficult to imagine what people who suffer from them have to go through every day. Maybe even impossible. Works like these do an excellent job portraying how devastating conditions like body dysmorphic disorder, post-traumatic stress disorder, or addiction can be.

The PTSD monster was once a confident and powerful ally. But after much trauma, it is left severely wounded and broken, every day reliving its pain.

Anxiety is a disorientating, chaotic, and pearlescent monster. It has many arms to grip you in fear, many eyes to watch you, and many mouths to make you doubt yourself. It is like a big parasite feeding on fear and paralyzing you.

ADHD monster is a hyperactive ball of energy, finding it hard to focus on one task and easily distracted by everything around it. A daydreamer with a chaotic galaxy of ideas and thoughts.

The BDD monster warps and distorts its hosts perception of themselves. It shows them an exaggeration of any flaw they might find, this will spiral until they become obsessed with it. The Monster can also cause social anxiety, OCD and depression.

BPD is a Demon with broken wings, but it often thinks it’s an angel. It is complex and usually misunderstood, and can completely override the mind and emotions. It has a fear of abandonment, yet struggles with stable relationships. It is more prone to act recklessly than most monsters which can result in dangerous consequences, addiction and even the suicide of its vessel

Insomnia is a Wraith that can manifest from various mental health (including depression, anxiety, OCD, and PTSD). The monster chains itself to its host leaving it feeling like a ghost inside its own body. Too uncomfortably awake to sleep, but too tired to function normally.

The Wraith’s body is partly made of stars from all of the dreams it has eaten and it drags a heavy timepiece across the ground. Constantly reminding its victims of lost time and the pressure to start a new day tired and restless

Autism is a developmental disorder because it is more susceptible to mental health.

The Addiction monster seems desirable and shiny but tricks its host by rewarding them with short-lived highs that lead to adverse consequences.

OCD is an annoying demon that traps you in repetition.

Bipolar is a two-headed beast that’s splitting into two extreme and contrasting monsters, and neither are fun to be around. They both have a hand on the steering wheel and can divert the ride at any time.

Depression is like a demon. Always there, some days it is small and just sitting on the shoulder quietly and on other days it is big, sitting on my back, screaming in the head and pushes you down.