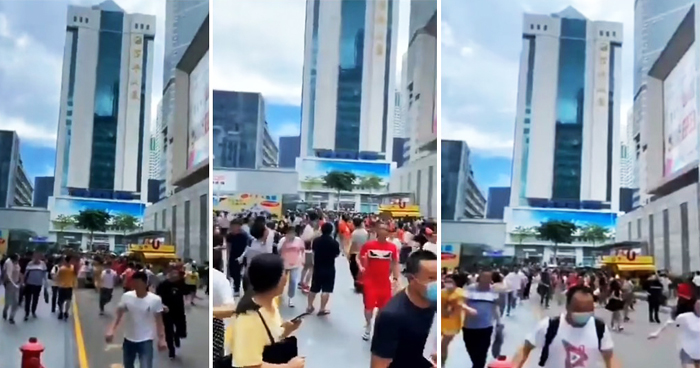 980ft Skyscraper In China Mysteriously Started To Shake Despite No Earthquake

In the southern city of Shenzhen, a 980ft SEG Plaza sparked panic after it mysteriously wobbled. It resulted in a mass exit, especially panic buyers had to run away to safety. No earthquakes have been reported, and authorities are left baffled as to what caused the motion.

One of China’s tallest skyscrapers, a 980ft SEG Plaza, has been sealed after it started to shake.

Constructed in the year 2000, the tower has since been sealed but had then been home to the electronics market, including numerous offices. However, according to a post on the Weibo platform, emergency management officials currently investigate the root cause.

The tower is home to the electronics market, including numerous offices.

No earthquakes have been reported, and authorities remain baffled as to what’s the root cause.

One theory so far, shared by Lu Jianxin, a chief engineer at China Construction Science and Industry Corp, opines that the phenomenon was caused by mechanical resonance, which occurs when a structure’s natural oscillations time up with an external force.

The Plaza pictured to the back right started wobbling at 1 p.m; on Tuesday in the southern city of Shenzhen.

Lu Jianxin, a chief engineer opines that the phenomenon was caused by mechanical resonance.

“If there were no earthquake today, it would be unusual for SEG Plaza to have such a situation. Judging from the currently available information, this could be an accidental frequency coincidence that is resonance.” Jianxin told the Shenzhen Special Zone Daily.

The district has since released a statement, claiming that everyone inside the building had been safely evacuated.

It added that no further building movements had been detected.

Accordingly, the district has since released a statement, claiming that everyone inside the building had been safely evacuated and that no further building movements had been detected. The district added: “Experts found no safety abnormalities in the main structure and surrounding environment of the building, and the interior and exterior components of the building appeared undamaged.”

However, it’s unclear how authorities will handle the tower in the heart of a city of over 12million people.

It remains unclear how authorities will handle the dangerous tower in the heart of a city of over 12million people. However, in 2020, the Chinese authorities had banned the construction of skyscrapers taller than 1,640ft. The new rules aimed to highlight Chinese characteristics as it also banned tacky copycat buildings modeled after world landmarks.