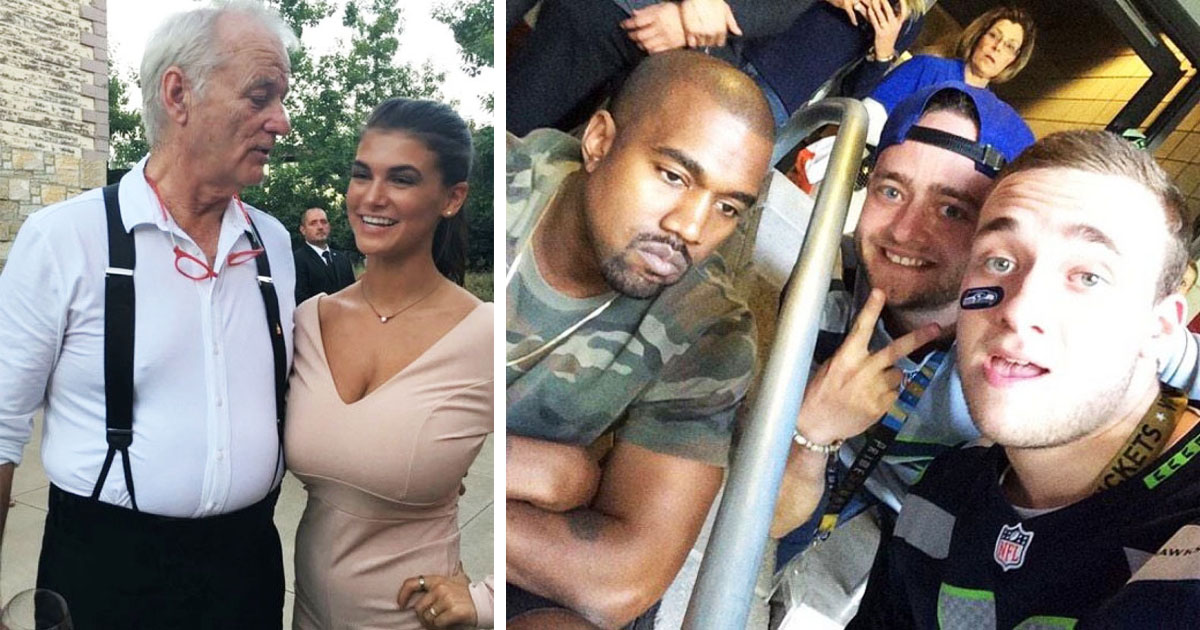 41 Most Hilarious Examples Of Celebrity Photobombs

Taking a shot with a well-known person is only midway to success. It isn’t easy to really get a good photo, and many people get very creative at the moment like this, which is not always right.

Additionally, celebrities themselves can do some strange things. These well-known people are really not to be blamed for stealing the spotlight as they are familiar with being on camera or chased by paparazzi.

Nevertheless, have a look at some of the A-lister photobombs ranging from Hollywood royalty to actual royalty.

#1 Jason Momoa led his inner Aquaman for this wedding shoot!

#3 Arnold Schwarzenegger Photobombs Tourists In Front Of The Eiffel Tower

#5 Old Man With Cigar Spoiled The Photo With Celebrity

#6 The Old Lady Is A Slash Fan, But She Doesn’t Know Slash Is Standing Behind Her

#7 Guy Wanted To Take A Pic In Front Of Microsoft Sign, But Then Bill Gates Happened

#8 Just A Selfie With Bruce Springsteen

#11 “My friend was having fun at a bar and met Tom Hanks there. He took his glasses, put them on, and fell asleep.”

#12 All right, I have found Robert Pattinson, but where is the camera in the stupid phone?!

#15 This place offered free meals to Liam Neeson as a joke, and he came!

#17 When you went to school and accidentally met the prince:

#19 Sophie Turner was amazed to have Ryan Gosling sitting behind her.

#20 “So my friend was outside a Broadway show when this guy grabbed her phone to take a selfie with her.”

#21 “As I snapped the selfie, I told Samuel L. Jackson to pose how he really felt about doing these kinds of things.”

#23 “Looks like Rihanna wasn’t really happy to see me.”

#24 “Adam Sandler recognized me and took a picture with me when I made a post about me on Reddit. Guess who is who.”

#25 “The time I was a little nervous to meet Morgan Freeman.”

#26 “Met Peter Dinklage at the X-Men Days of Future Past NYC premiere. I’m 6′ 6”, so he decided to take a selfie with me when I asked for a photo. The result is awesome.”

#27 “Here’s a pic of Bill Murray staring at my boobs. This is the only picture I have with him. Enjoy. Thank my aunt.”

#28 And he flies economy class!

#29 “So, Nicolas Cage came to our restaurant and ordered champagne. How could this happen?”

#30 A perfect selfie with Bill Clinton

#31 Had Our Engagement Photos Photobombed By Dave Chappelle

#36 Zach Braff, I Think You Photobombed My Newlywed Couple The Other Day In New York. Well Played

#40 I Tried To Take A Photo With My Baby, But Some Idiot Has Ruined It