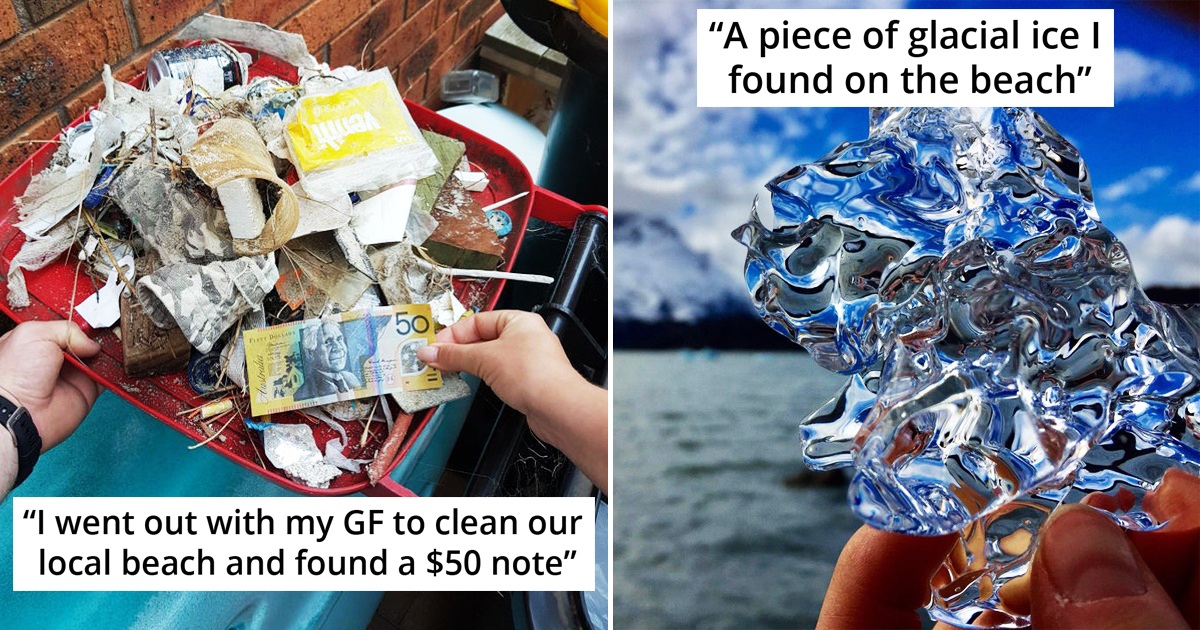 30 Surprising Things People Have Witnessed At The Beach

The beach is where things that are lost at sea returns to. Sometimes, it takes decades and maybe even a century for these things to reach land once again, but with the new age of smartphone cameras, it has been easier to share these unique findings.

This rock I found on Chesil Beach, UK, is perfectly round.

Found an Indian bead washed up on the shore.

This round sea glass that I found at the beach.

A beach full of Portuguese Man-o-wars in the Azores.

Took the day off for my 40th birthday and the beach gods granted me this! Didn’t even know these small bottles exist.

This dried seaweed is stuck in sand and the wind made it draw concentric circles.

Got inspired by trashtags and went to clean local beach with gf. Found a $50 note.

Found a rock within a rock.

You don’t find a whale’s skull at the beach often.

Found this shell Cape Cod corporation beach. Wished she’d known Matt had fun with our kids at the beach. Threw the shell back out to the sea.

Amazing stacked stone arches at the beach in the morning.

This star print on the rock.

Another very satisfyingly round pebble from the beach.

Storm has brought this to the shores of French beach.

This chunk of glacial ice was weathered on a black sand beach of Iceland. Perfect point to enjoy the view.

Found this piece of glacial ice at the beach.

Beautiful glass ball in Hawaii I found with my wife that has created a small ecosystem.

This beach has display of common garbage and information of how long they decompose.

Someone made this amazing sandcastle on Jerusalem Beach in Tel Aviv.

Someone made a stone rainbow! Found at Hornsea Beach, UK.

Sandcastle at the beach with really clean cuts.

The various footprints and tracks left on the beach.

Mom found a kilo of cocaine washed up on South Florida this morning.

Found this baby octopus on the beach, he’s going to be 14ft wide in two years.

20 Stunning Brides Who Show Their Pics Before And After Wedding Makeup November 24, 2020

29 Illustrations From An Independent Modern Woman As She Shares Her Thoughts November 24, 2020