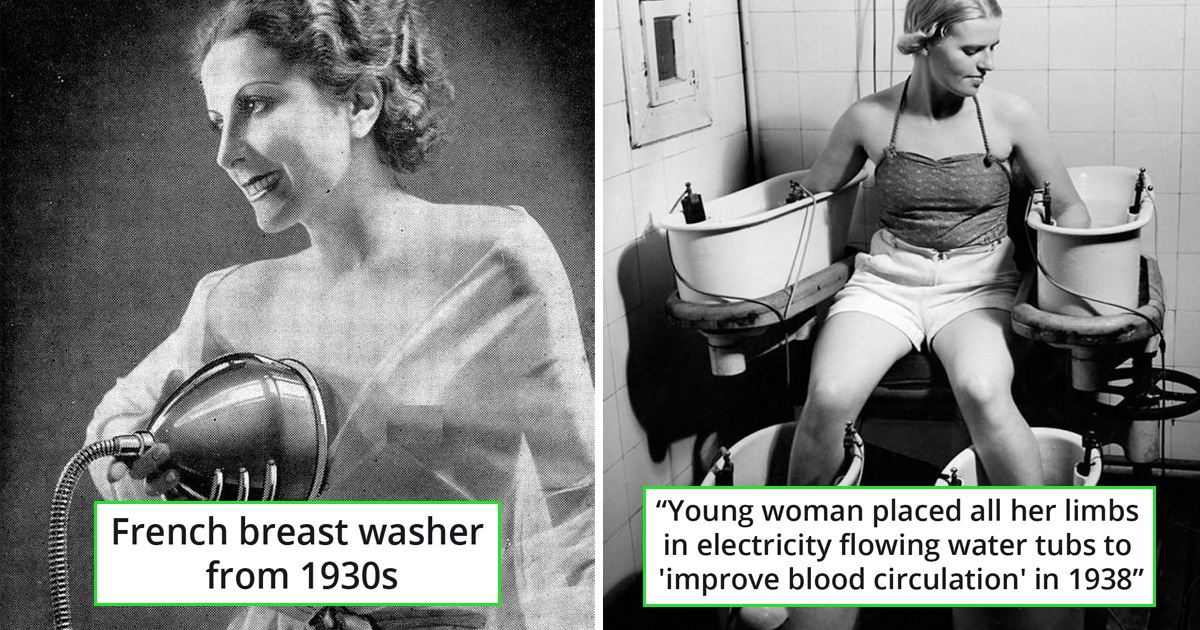 For the longest time, beauty has been the prize that women chase after. Anyone will agree that ‘inner beauty’ is so much more important… but in a world where judging your outer appearance is easier and automatic, the race to become a beautiful woman continues. Almost every culture that existed on this earth contains a certain unusual standard to value a woman’s beauty.

Plastic surgery and other procedures are the current trends that women go through to change parts of their bodies into something ‘more ideal.’ However, women of the past are willing to wear ridiculous things and sometimes even hurt themselves to appear ‘feminine.’ These old pictures of ‘pretty women’ of the past are really shocking.

Woman getting seam painted on her legs in 1926 so they look like stockings.

Foot binding tradition from ancient China since the 10th century.

One of the most painful beauty practices of the past ban today is foot binding in China. For thousands of years, women of China will bind their daughters’ feet so they won’t grow big. This is evident in the numerous warped bones of female skeletons found in China.

A French breast washer from 1930s.

This young woman placed all four limbs in water tubs then let electrical currents ran through them to ‘improve blood circulation’ in 1938.

A woman on a freckle removal procedure. The eyes are covered air-tight, the nostrils are blocked, and she breathes from a special tube on her mouth. This is 1930.

Footbinding cannot be undone and inflicts permanent painful damage to women for the rest of their life. It was banned in 1911, but there are still elderly women today alive with this painful custom’s pain and disabilities. What was the idea of footbinding that the Chinese were so obsessed with?

These women are getting seam painted at a store located in Croydon, London. 1941.

This woman is wearing a full-faced mask while she’s swimming to protect herself from sunlight in 1920s.

Japanese women dyed their teeth black as a sign of beauty through the 17th to 19th century.

The ideal size of three-inch feet bestows a lady with the title of a ‘golden lotus.’ A golden lotus is a social status of a marriageable woman and creates a sense of wanting to protect from men as they take small steps with their small feet (due to how painful it was). The last lotus shoe factory closed down in 1999.

…what about my nose?

Before sunscreen, sunbathers wore ‘freckleproof cape’ to block sunlight and they often come with built-in sunglasses.

Torso x-ray of a women who wore corset and without.

A man taking precise measurements of a beautiful young woman’s head and face in 1933.

Never been happier to be in lockdown and wearing pajamas all day long with Netflix on.