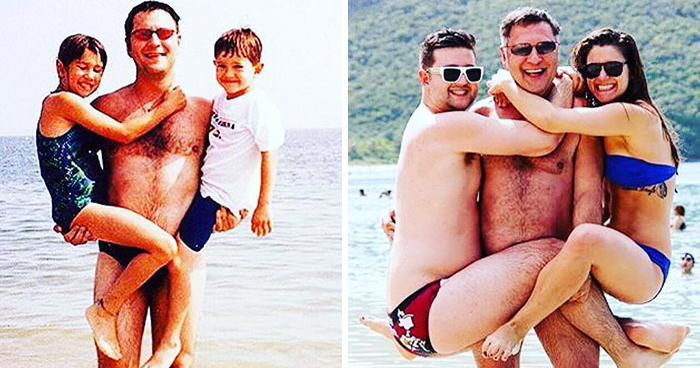 30 Siblings Who Made Hilarious Recreation Of Their Childhood Photos

Having a sibling is not always sunshine and rainbow all the time. But even when you fight, you just can’t stop caring for each other in times of need. That’s what having a sibling is like. Through all the good and bad times, you might cuss at and then forgive each other, but these pictures solidify the fact that is you still love them.

Best of all is about enjoying all those giggles as you recreated those moments, whether that’s for your mom’s birthday or just to reminisce the old days!

Left is him with his cousin and 10 years later, it was his cousin’s turn.

20 years apart and the little borther towered them all.

I obviously was not forced into recreating this.

The remade this Christmas picture from 18 years later.

These two siblings who still enjoy being buried in sand.

At the Burger King with same weird friends. The only thing that didn’t change was it still sucks.

Recreated this picture 18 years later and made our mom laughed out loud.

So, we did that thing.

You will not believe the effort and commitment me and my bother put into remaking this picture.

We (tried) to do that thing.

Took this New Year’s Eve picture with my brother and his dog. Took another 11 years later.

A happy family although that little brother is a tad too big now.

Playing in the leaves. We just need a whole lot more leaves to recreate this.

These three brothers who decided to recreate their old photoshoot.

Two fully grown adults attempting to recreate this moment for their mom’s birthday.

That awkward smile you make when your sister has to hold you as a full-grown adult.

We never grew up, 16 years later on Halloween.

Still the same bored siblings who got dragged into the middle of nowhere.

Then and now. What has changed, really?

We pulled it off!