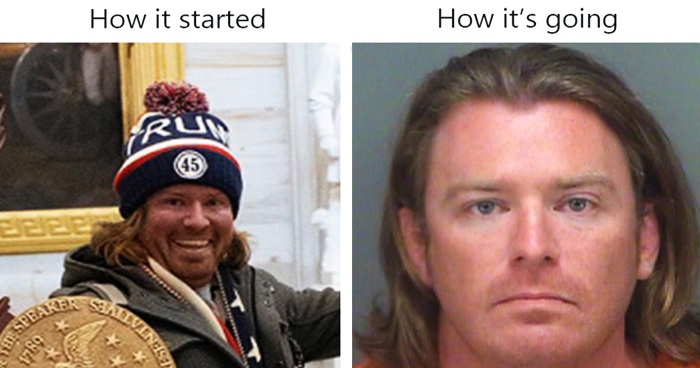 Just 6 days after we entered 2021, the world in general and the United States, in particular, are shocked to learn of a storm led by a losing political party that broke in Capitol Building on January 6th. Not even a week into 2021, shocking images and footage of these proud rioters went viral.

Their pride became their downfall as these people who did not heed to the social distancing rules showed their face. The Internet did its magic, easily identifying the perpetrators, and the police quickly plucked them one by one.

At more than 800k likes, people are absolutely relieved to see that these rioters are finally given the punishment they deserve. People couldn’t help but crack jokes and point out how they look somber as they simply reap what they sowed.

They look dejected and depressed.

Very much like how we were when we saw them storm into the building.

This one had even the audacity to wear his badge there.

Yes, that made it very easy to confirm who this man was. That made it super easy for the company to cut ties off as well as finding and arresting him.

These supporters were clearly marching and stormed and into the US Capitol in an effort to stop the session in Congress. The police are determined to find the hundreds of perpetrators involved in this and are in the middle of identifying the rest of them through online pictures.

They’d probably thought they looked cool and wouldn’t be in trouble.

No, sir, this isn’t something to be proud of.

Now even this ‘QAnon Shaman’ man can escape.

People couldn’t help but point out how ridiculous some of these people are.

Some also pointed out their sad of an excuse attempt to disguise their identity… without a mask.