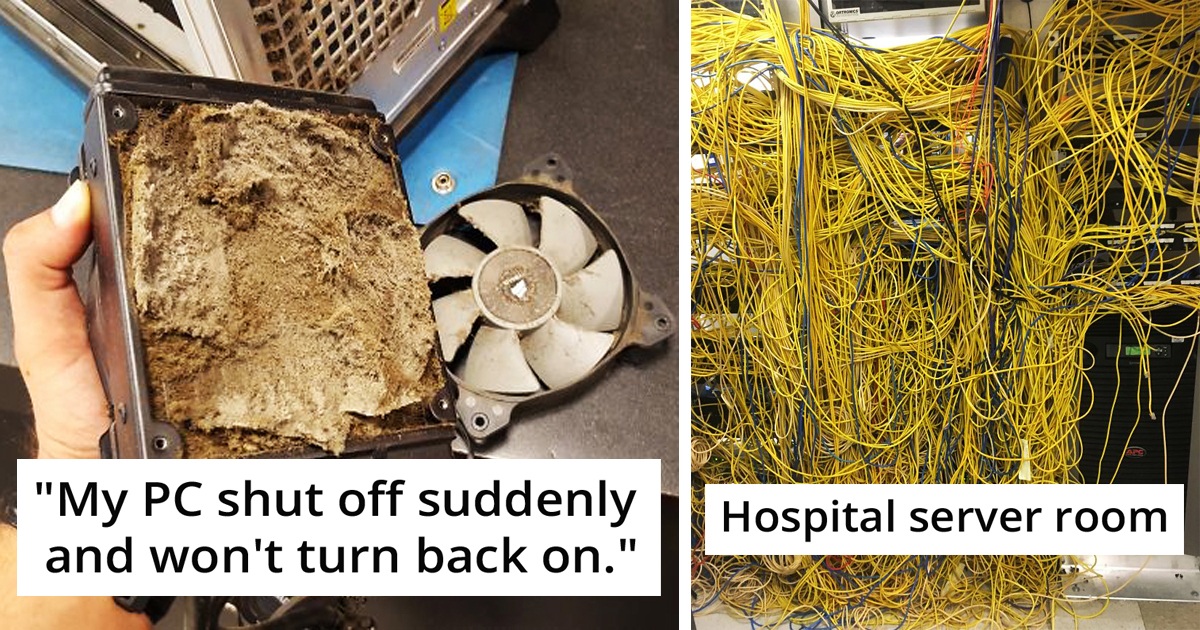 Tech and IT stuff aren’t for everyone. There are still people, in their 20s and 30s, who are struggling with how fast time is changing. A lot of us just don’t have the time to keep up with the newest technology. But it really is impressive to see how some people just manage to literally set their PC on fire and thinks that’s completely harmless.

The description on the subreddit of r/techsupportgore says that you might cringe to the brink of passing out. What doesn’t kill you makes you stronger, I guess.

Printer is not working after refill.

The server room of this hospital.

What could the story be here?

This woman placed a heater right next to a PC who has been shutting down randomly. She also smelled burning a few times.

The ancient ruins of ASUS.

Can’t even believe what is happening right here.

This user was told to shut down and label the computer as infected since it has a virus. They did just accordingly.

My PC shutdown all of a sudden and won’t turn on. That’s dust and most probably used a lot by smokers.

Fan was making a lot of noise, so I taped it up!

I was looking for a space to set up my candle. This place looked perfect!

AT&T DSL services has been so poor, but they couldn’t figure out why and said it could be my wires. No, Sherlock.

Should have told them this isn’t touchscreen.

My space heater is not working.

Do not erase, but let’s stick this with a magnet.

An enthusiastic unpacking of a new mouse.

The office internet stopped working when someone unplugged something.

Customer came with his iPhone like this after he peeled it off. He said he was trying to get rid of the crack on it.

This person hammered the USB receiver so it looks flat.

It didn’t fit, so I bent the pin to make it fit.

Never forget to tip the server.

A friend drilled holes into his mouse so it can give him an ‘advantage’.

My grandpa thought the headphone jack was a screw hole.

The disc drive in this highschool hasn’t been working. This probably has been here since 2012.

User claimed he ‘dropped it walking to the car’, the day after Super Bowl.

This is how students treat the Chromebooks school provide.

My flash drive won’t appear and I’ve tried everything.

Mysterious Metal Monolith Found In The Middle Of The Desert Of Utah November 25, 2020