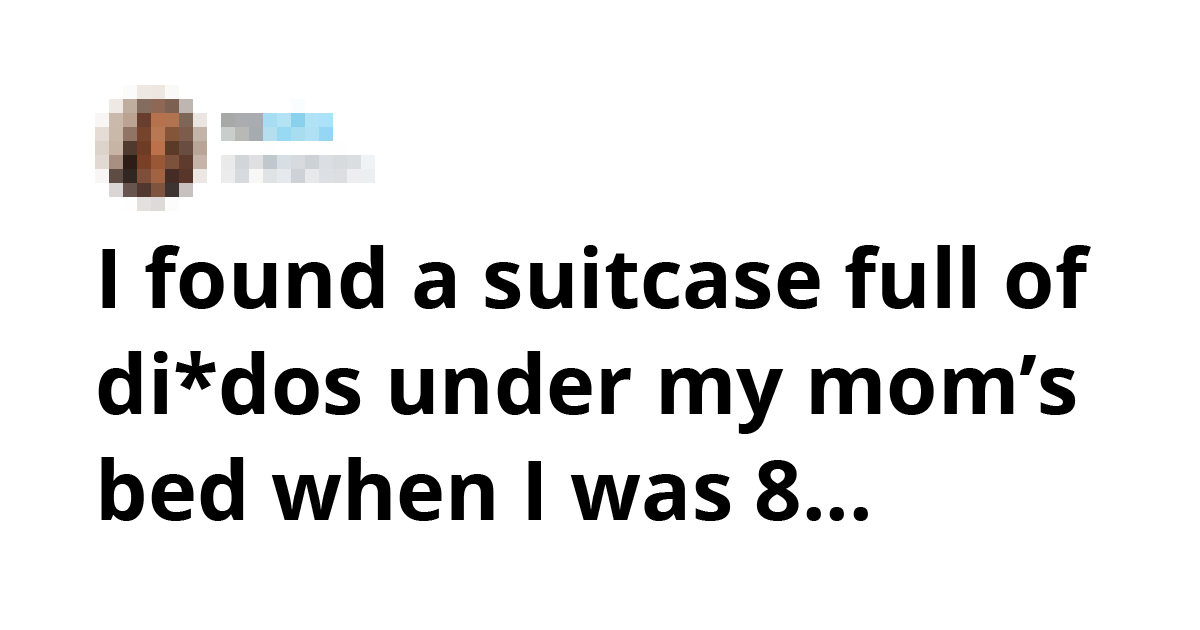 25 People Shared Things They Were Definitely Never Supposed To See

They didn’t mean to peek, but one thing led to another, and they ended up in a situation where they know something they shouldn’t have. In movies, people like this often encounter something even bigger as the secret becomes even more known by more people. But here are people who knew things and decided to carry that secret to the grave.

As they remain anonymous as another user on the Internet, they decided to share the secret on Reddit. Perhaps it was to let go a little of the burden from keeping a secret they can’t tell anyone they know in real life.

“I had a patient who was close to death and we called her daughter, she came and we set her up in the room to stay until her mother passed, she brought her boyfriend which is not abnormal. I walked in to do my routine check and they were having sex on the cot that was set up for her maybe 15 feet from her dying mother. I mostly didn’t want to see so I am answering this wrong.” – BoxFortress

“Scrolling through the depths of my mother’s Facebook and found a status from over 10 years ago that said ‘I like it on the kitchen floor…’ Checked the comments, was on the same wavelength as everyone else, really hoping she was hacked. But it still disturbs me to this day.” – Reddit

“I found invitations to my big surprise 18th birthday just lying on the floor a few weeks before the event, I had to act surprised when the time came to walk through the door to the party, which I did. The only thing is, my twin brother also knew (which I didn’t know at the time), and let’s just say his acting skills are really bad… So we both found out in different ways about the surprise party but neither of us knew that we found out about it. So when I walked through the door for the ‘surprise’, I could tell from his reaction that he knew…” – untg

“Hard drive failed on my dad’s computer. The data recovery software did a pretty good job really, but I could have done without it recovering nude & lingerie shots of the various women he’s been banging behind my mother’s back over the years.” – CMDRTheDarkLord

“When I was a young teen, I was once leaving my house to go do something in the neighborhood. As soon as I got out of the door I heard my parents at the garage. My mother seemed to be in her car, and my father… was sitting down behind her car, and pleading with her not to leave. My parents were divorcing, and I saw a few scenes that I wish I never had. Not really horrific, but seeing your parents in emotional pain can be rough.” – Eaglestrike

“My severance check. Apparently, someone at the payroll company addressed it to me instead of HR. Opened it at my desk and laughed, packed up my sh** and left.” – BougieB_83

“I was very young, somewhere between 7-9. My family was always pretty poor, especially my dad and his girlfriend, but I never gave much thought to it. One time I was driving home from the grocery store with my dad. Being a bored small kid, I pulled the receipt out of the bag to read the stuff off of it. I ended up finding something that said we paid with food stamps. I asked him about why it said that. He told me to hand him the receipt, to which he crumpled it up violently and said, ‘Now it’s gone.’ This still keeps me up at night.” – Reddit

“Worked for a downtown metropolitan hotel for a long time, and I’ve seen a lot I wasn’t supposed to see. Probably the worst was a kid with an old man.

Checked this guy in at like 1 in the morning (not uncommon because people travel at different times) but he was alone. Like an hour later he asked for something like a towel or blanket. Anyways, dispatched our runner to deliver it. After the runner comes to me and says he thinks something is wrong because he caught a glimpse of someone and the old guy was trying hard to block the entrance.

Being that we were supposed to take stuff like human trafficking seriously, I asked our maintenance to cut his power so we would get a call to come up to try and fix the problem. He does and I go up with him to apologize for the inconvenience because the guy was also a top-tier member. Sure enough, we hear a kid in the bathroom hiding. Tried to ask who the kid was and the old guy tried everything to shut us down from throwing his status around to bribing. Called the cops and let them deal with it.’ – panjier

“Just 2 days ago, at a community pool, a teenage couple who entered into the pool area went into the hot tub. Stood up to stretch my legs and looked over to, well, sex in the hot tub. It was midday! I cringed pretty hard… but I laughed even harder when the neighborhood cop showed up.” – my-darling-nikki

“I found a letter between my parents back when my dad was in the army (10 years before I was born) when cleaning out the house. He was saying how they should get a divorce because it just wasn’t seeming to work out. When I was 16, they did end up getting a divorce, I’ve never talked to them about it.” – -NoFaithInFate-

“David Copperfield show: I was at an angle that allowed me to see the volunteers running out from the stage during a disappearing act.” – CYAAfghanistan

“Exam questions and answers, all of them. I was left alone in school and the teacher was on her phone, weird me tryna find a piece of paper saw all answers, questions, and stuff. Took them pics, and the teacher comes in saying, ‘Oh there you are, did you find your paper?’ I go home, sent to all of my friends the pics. The next day we all get high *ss grades in all the exams.” – Reddit

“I came across a sex tape/nude pictures of my sister and her boyfriend. She’s long broken up with that boyfriend and recently got married, I haven’t told her and will probably take it to my grave.” – Reddit

“I used to work on oilrigs and one stormy night I had to go to the cellar deck (the lowest level of the rig) to do a repair and I caught the safety officer and the production supervisor opening a separator valve and emptying the contents (oily water) straight into the sea! They obviously chose a winter stormy night to do this so that by morning the oil would be elsewhere.” – Carl_Clegg

“The receipts to everything under the Christmas tree.” – Reddit

“A bit boring, but I found an engagement ring in a closet six months before my boyfriend popped the question. In those six months I kept going back to the closet to put the ring on my finger and admire it.” – AwkwardBreak

“Interning in the Emergency Department, I walked past a room I wasn’t allowed in due to the trauma of the situation and unintentionally saw a man with both his knees broken backward.” – Reddit

“We had a guy commit suicide at work. As a maintenance shift leader, they assigned me to move out about 1000 feet from where it happened and block off the path where the in plant vehicle would take him from the incident to the waiting ambulance. As the cart passed by the blanket that was covering him blew off and I saw his body there on the cart with a gun shot wound to the head. Such a scary and sad moment.” – DarthKegger

“Leaving work late one evening, I saw the HR director and CFO in a dark office shredding papers (no, that’s not a euphemism). I didn’t say anything but quietly walked on down the hall. Two weeks later we were raided by the SEC and several people were charged with cooking the books.” – TheGooOnTheFloor

“When I was about 16, I was snooping in my parent’s wardrobe. Found a diary written by my mother when she was 14 (from the year 1970). Read some beautiful and brilliantly written entries about meeting and dating my dad (who was 16 at the time). Had to read a little between the lines in some slightly later entries as they were written with such flowery language. In one such entry, all of a sudden she discloses that she’s had an abortion. Performed by my grandfather. An anesthesiologist. She never told anyone.” – theunicornbort

“Me and a friend snuck away from a house party at 2am once, we wanted to go to this local abbey. We were exploring the grounds and generally having a nice time when we see two cars stop nearby. Instinctively we hid in some bushes and witnessed what was clearly a large drug trade. We definitely were not supposed to see that. We waited for them to finish their business and then we headed back to the party.” – idiedforwutnow

“When I was about 16, I was snooping in my parent’s wardrobe. Found a diary written by my mother when she was 14 (from the year 1970). Read some beautiful and brilliantly written entries about meeting and dating my dad (who was 16 at the time). Had to read a little between the lines in some slightly later entries as they were written with such flowery language. In one such entry, all of a sudden she discloses that she’s had an abortion. Performed by my grandfather. An anesthesiologist. She never told anyone.” – theunicornbort