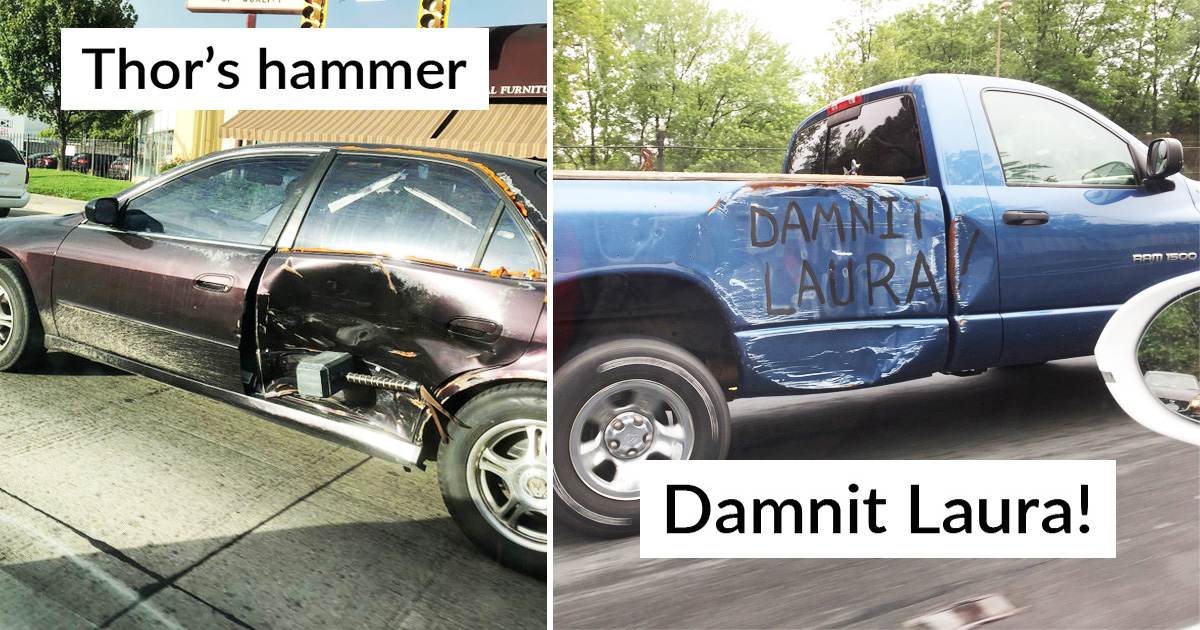 20 People Who Fixed Their Car Dents In Hilariously Creative Way

Not everyone was born to be a good driver, so every once in a while, we’ll stumble on that one person who will always step on the gas instead of the brake. The bad news isn’t that – it’s the fact that it’s your car who got crashed on. On the other hand, you could be that one person who can’t stop running onto things while driving.

Well, we’ve been in one small accident one way or another. It’s not fun to have to head to the mechanic and be told you have to spend a few hundred dollars to get it fixed. If it’s only cosmetic, you can always head home instead and get that dent or scratch ‘fixed’ with your style.

Saw this car in the mall parking lot. That’s one way to fix a dent.

These all do look fun, but did you know that The Association for Safe International Road Travel (ASIRT) declares car accidents as a major public health concern? In fact, it is a major death cause for people between 15-29. Hence is why they have been making real efforts in raising the awareness of dangerous driving. We hope to make your day, or car dent, better with our post, but never forget to drive safely!

How you should be fixing your car’s dent.

Annual Global Road Crash Statistics announced that more than 1.2 million deaths consisting mostly of between 15-44 year old were caused by road crashes and that’s about 3000 people a day. Almost 400,000 of those who died are under 25, making up around 30% of total fatalities. 90% of all fatalities happen in low and middle-income countries, places that don’t even account for half of the world’s vehicles.

A car dent that was worth it. (Joking, Chuck Norris didn’t actually do this.)

Road accidents account for a total of a country’s 1-2% GDP, about $518 million. It costs about 10% of that number for low and middle-income countries, but developmental assistance barely covers that cost. By 2030, road crashes would become the world’s 5th leading cause of death instead of 9th.

Blaming it all on him.

Between hundreds of dollars for new bumper and this? This looks slightly better.

Remember to stay safe! These minor accidents typically don’t cause injuries to the drivers or passengers and are even fun to ‘fix’! But road injuries can be very fatal and even cause about 20 to 50 million causes of injuries and disabilities on people.

Horrible dent on car, might as well create a small world in there.

16-year-old girl told her bro one band-aid a day until that dent is fixed. It’s day 96.

Car owner waiting for his chance to get back at that mailbox!

This person who would rather to use graffiti then fixing his car’s door.

A condescending face that we all put when someone or something hit our car.

Just at all these people putting the blames of their car dents on others!

When a man tells you he’s seen a T-Rex before.

This horrible dent that got turned into a gorgeous panoramic view of the region.

That was one angry and strong deer.