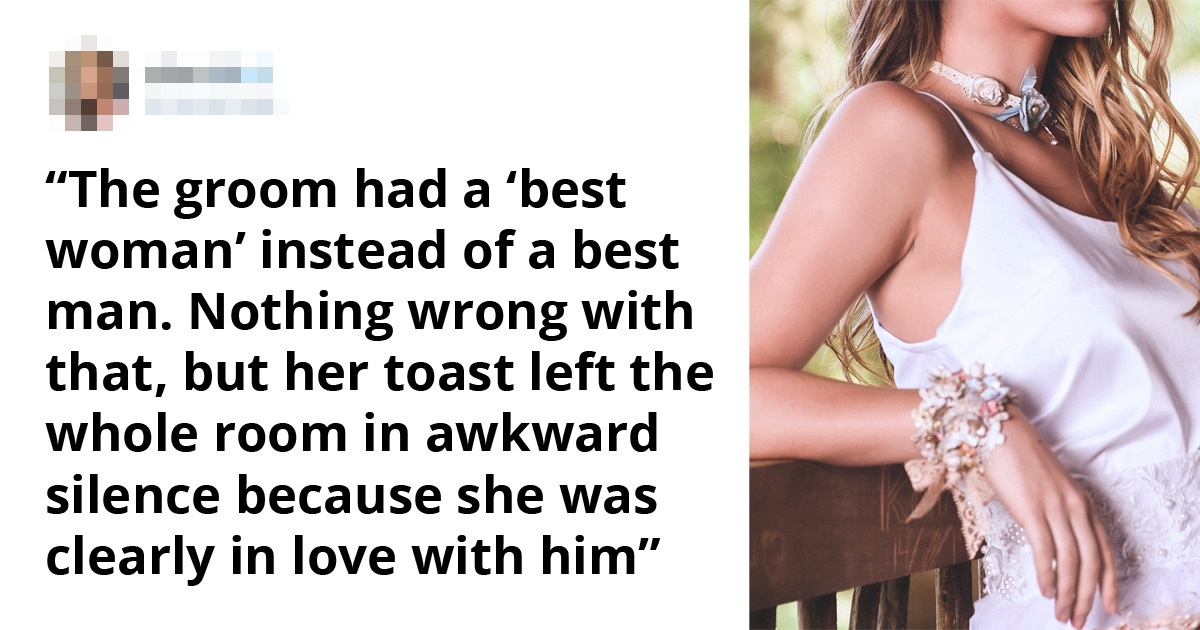 20 People Share Weddings Moments That Made Them Think: “They Won’t Last Long”

Why do people go ahead with weddings when they’re unsure of their relationship? What were they thinking? Some people can even see just how impossible the main couple is after witnessing their wedding. These people knew they won’t be able to spend more than a few hours next to each other, much less, their whole life.

When a Reddit user the question, the stories that people shared were nonetheless shocking. It goes to say that we’re here to share with you twenty stories that will you to agree that they really should have even thought about spending thousands on the wedding.

“When she went alone on her honeymoon because she booked a trip to the Caribbean despite her newlywed husband having a severe sun allergy.

They separated half a year after the wedding, and my friend, the bride, told me that the marriage had been a way to prolong the relationship despite both of them knowing that it was already over some time before they got married. Kinda like a couple gets a baby to save a marriage. It really was just sad because they were a nice couple, but they stayed friends after separating.” – Short_Perspective72

“Groom got into a fistfight with the father of the bride. Split after 4 months.” – screamingincaps

“The entire bridal party, including parents of the wedded couple, entering into a betting pool of how long the marriage would last, at the wedding reception. If I remember correctly, the best man won at 14 months.” – jiggajim

“I was the best man at a wedding a few years back. At the rehearsal dinner, his future in-laws were treating him like crap. They were bossing him around, making him do crap, and talking down to him. They didn’t let him hang out with his groomsmen afterward while the bride went out and got drunk.

They are now divorced.” – Actuaryba

“When the maid of honor professed her love for my brother during her toast at my brother’s wedding… and her husband walked up to the head table, picked her up, and carried her away before she could embarrass him further. They lasted about 3 months after that. My brother and his wife, on the other hand, are still happily married 20 years later.” – cat9tail

“The groom took the stupid cake thing to an extreme. The bride had given him his bite and mushed a little on his chin or nose. He then took a piece and MASHED it into her face so hard that I was expecting her to end up with a bloody nose. Cake and frosting got up her nose, in her eyes, down the front of her dress, etc.

The bride had to go get cleaned up, had her makeup redone, and was ugly-crying within an hour of saying, “I do.” He didn’t give a f**k.” – erik_working

“I was at the wedding of one of my mum’s oldest friends, and she clearly had more fun dancing with the best man after the wedding. Long story short, they dated for a while after the divorce.” – MeaningfulMagpie

“His third wedding. Same venue and same after ceremony driving away vehicle as the first two.” – paintedfingertips

“The groom and best man had a dancing routine for getting into the church ceremony, and they got nearly halfway through it, and I guess the groom felt they hadn’t received much applause and wows from us the attendees and decided to go back to the entrance and start all over. Sigh…” – teatowelmechanic

“When the groom started off his speech by saying, “we all know I didn’t want to get married, but we’re here for bride and child we had together_.” 1 year, 3 months later they were finished.” – blkwid0w

“Had an old boss who was divorced. He told me once, ‘I should have known it wasn’t going to last when the only happy moment I had on my wedding day was when I snuck out to smoke weed with my buddies in the parking lot.'” – BigMax

“The bride told her bridesmaids that she didn’t actually want to get married. Multiple times. No one told the groom until after the divorce.” – TaylorSwiftsCl**oris

“When they disappeared for half an hour during the reception. They were both “saving themselves for marriage” and were desperate to bone down. Which is a fine thing to want. But it turns out that was more or less the main reason they got married. They made it almost a year.” – ericdavis1240214

“The groom had a “best woman” instead of a best man. Nothing wrong with that, but her toast left the whole room in awkward silence because she was clearly in love with him.” – summerreyner

“Two friends of mine got married, and when they gave their vows, the guy started laughing at the part about being faithful. Oops.” – Shakespurious

“Wedding photographer here. An infamous one for me was leaving a venue late one night, and as I’m walking to the train, I can see the bride down an alley, on her knees with the best man.” – the_heff

“I was at a wedding when a phone went off during the ceremony, in the middle of exchanging vows. It was the grooms. He took the call. They are divorced now.” – TomppaTom

“When he smashed the cake in her face and hair, then went off drinking with his buddies. In 12 weeks, she filed. Good thing I didn’t buy an expensive gift.” – Spanky007_bong_867

“I was the wedding photographer for a reality TV show. End of the night, I’m having a few drinks with the film crew, and the groom has come up to me and one of the producers and says, “I think I’ve made a big mistake.”

So we’re trying to be reassuring and telling him it’s natural to second guess such a bit decision, to which he replies, “No, I mean, I think I’m gay.” I had them both on Facebook; the drama the next week was mesmerizing to watch unfold.” – the_heff

“I used to work for an event center that hosted a lot of weddings. After one ceremony I saw the groom slap the butt of one of the bridesmaids in the hallway. She laughed and with a big smile said, ‘Oh Jeremy, you’ll never change!'” – ChillyWillie03