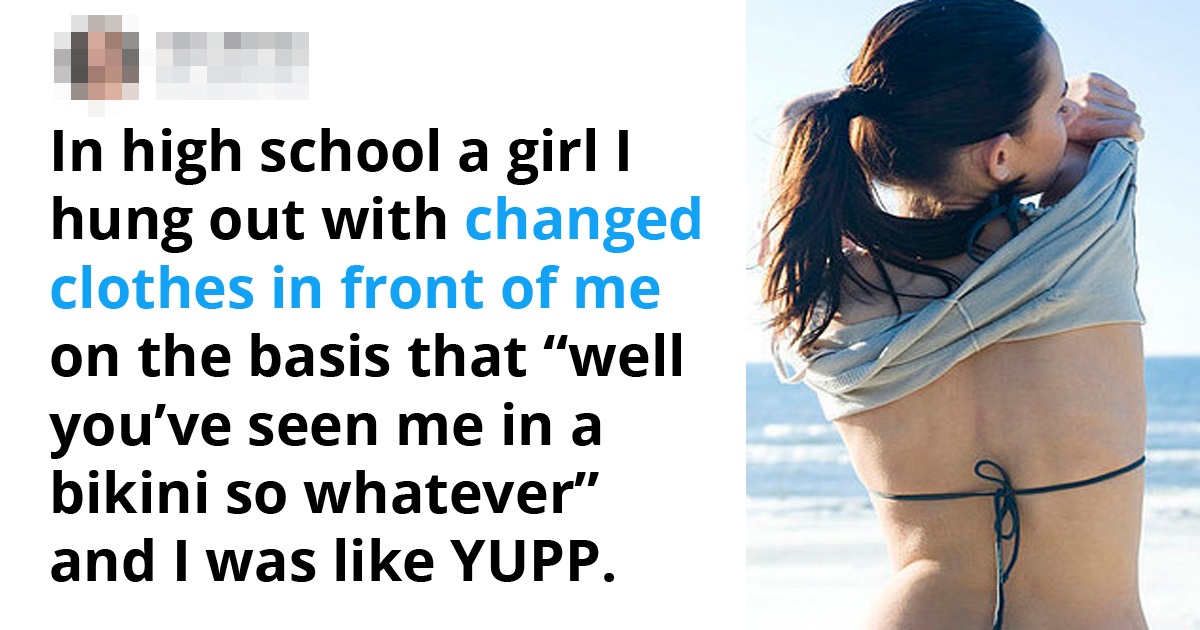 “No, she’s just a friend,” is the famous last word of that man who thought they’d never looked at their friend that way. Until they realized something inside them is being awakened. Most of us think our friends are not really interested in us until we stumbled upon this thread.

So many people are admitting how certain things their friends did just happened to hit them in the right spot. And it’s also certainly adorable to see how so many of them are inexperienced with the whole dating that it’d take them up to several months to finally click it in their mind.

“I had a friend who I hung out with during high school. We would make our homework together and always study together for the big tests. She was attractive but I never looked at her that way. One day when we were in the library studying, I noticed that she wore a different perfume. When I asked about it, she came very close to me and made me sniff her neck. I never knew that I could get a boner so fast. After that, things went further and eventually we got married years later lol” – Imparat0r

“Decide to randomly put their legs on your lap to sleep while in a car.” – meeplion

“I always went by an abbreviation of my name, he was the only person to always use my full name. Dunno why, but always made me weak.” – Aloise500

“I was off from college for about a week, I came back and a friend of mine who I hung out with every day ran up and hugged me, but as she hugged me she jumped and wrapped her legs around me and we were just looking at each other. Should have just went for it but alas, I only realized after the fact months later. If I could go back in time I’d punch myself in the balls.” – Blueboi2018

“In high school, a girl I hung out with changed clothes in front of me on the basis that “well you’ve seen me in a bikini so whatever” and I was like YUPP.” – I_AM_PLUNGER

“I was making coffee in my Aeropress for us and pressing slowly on the top of it like you’re supposed to when she shouldered me over a little and leaned on my hand to push it down faster. It was cute as f**k and I’ll never forget it.” – PM_ME_SEXY_PAULDRONS

“A girl I became friends with on a school trip in high school fell asleep on my shoulders on the ride back.” – SerendipitouslySane

“I remember a girl classmate friend liking the smell of my deodorant and just grabbing onto my arm and then proceed to walk beside me.” – DarkmanBeyond

“‘Choked’ me playfully. Shocked the hell out of me.” – christian2pt0

“We were sitting on her couch watching ‘Thor: Ragnarok,’ finished our Chinese food, she went got a pint of Ben & Jerry’s out of her freezer and she sat sideways half on my lap and took turns taking a bite and feeding me a bite. It was oddly intimate, but she’d made it clear she was convinced if we started to date we’d end up married, and she wasn’t sure she was ready for that.

Six months later we were dating, six months after that we were married, coming up on our 2 year anniversary!” – AKBigDaddy

“When she put her hands on the back of her neck while leaning on the table and her eyes never left yours while listening to you. Instant turn on…” – Champion_27

“A group of us went to a firework display and during the usual, louder and bigger finale fireworks she jumped, grabbed my arm tight, and didn’t let go. Not sure what happened inside me but yeah, that did it.” – StAnger99

“Have this friend of mine, one day at home while we were drinking with some other friends she started singing… at that moment I looked at her and didn’t just see my friend, I saw a very attractive young woman. I sometimes still see that moment when I look at her and shake the thought away.” – FiyzValiant

“About a year ago I had the same thing with my girlfriend before we got together. I have had a thing for her for quite a while when this happened but in that one night, where she drove me home from a festival at like 4 in the morning, she started to sing randomly to a song I happened to like very much at the time and it was the most beautiful thing I‘ve ever heard.

I must‘ve stared because suddenly she stopped and asked if I stared because I liked it or because of something else. So then I told her that I really liked her singing, which she obviously denied because her “singing was horrible.“ We said goodbye and I thought about what happened for the next few days. A week later I decided to ask her out and we are still together one year later.” – Hekate_II

“I was once speaking to this customer and I couldn’t understand her because of her thick Russian accent, so my coworker stepped in and started speaking fluent Russian and I swear it was the hottest thing ever. I definitely have a thing for accents because that sh** was Putin’ me in some type of mood. F**k.” – lukeerle

“She asked me to touch her thigh, she was very proud of them after working out. Little did she know I really like thighs. We’re engaged now.” – 19JaBra92

“Ruffled my hair. It wasn’t that big a deal, but she was one of my close friends, and that just… Wow.” – UrGayFriendBajamin

“He was driving and I was riding shotgun. He had to reverse to parallel park and turned his torso towards me, putting his arm around my seat in order to look back. He did that so confidently and effortlessly that it made me feel a little funny.” – CommercialImpressive

“I had a friend lick my face as a joke because she was one of those girls that thought they were quirky or different for acting like a weirdo or something, it was like freshman year of high school, iirc.

It was definitely strange as hell, but Jesus Christ did she awaken something in me, I wasn’t even particularly attracted to her, I was just licked and I felt the arousal creeping in and I’m standing there like ‘oh god oh f**k please don’t get a boner f**k f**k f**k no no no no.'” – Wandering_Claptrap