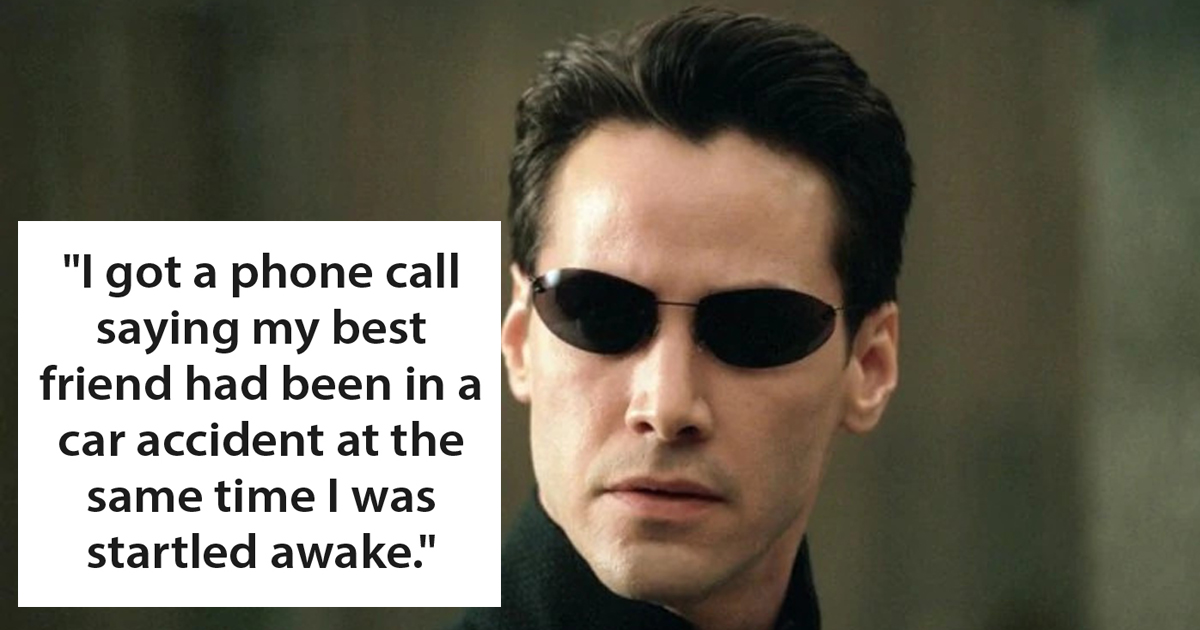 Do you believe in a being of absolute power? Well, we’ll leave the answers to each of your own, but these people have surely felt at least weirded out by life. A glitch in the matrix is a moment that just sounds too amazing to be a coincidence by also cannot be explained by human logic.

Some people decided to share their experiences and Green Lemon just thinks it’s probably enough internet for the day. But we’re not signing off before sharing the stories with our readers as well.

This happens frequently and one of them was the lingering snippet of a turkey on Joey’s head from ‘Friends’. I had that imagination at work for the whole day only to open the TC and shows that very same scene – VenkmanPhD

I bought a full pack of 18 eggs, boiled and cooled them. When I put them back into the cartoon, I was counting only 16 of them. Never found the other two and I’ve lost a small pan as well as a knife now – @aleeciaw

3. The smell of the hospital.

A few years ago, I caught a whiff of hospital scent and I’ve been to many. I smelled that and my mom told me my sister got into an accident and she was just from the hospital – @sabrinaslaughter

When I was in ninth grade, I was startled awake from sleeping on the couch while watching a movie. I checked the clock and suddenly felt warm, as if someone gave me a good hug. Then a phone call came saying my best friend was killed in an accident at the same time I woke up.

I told my father that I dreamed he died. Two weeks later, he said I saved his life because the water was flooding the boat and he quickly pulled to the nearest land. The search and rescue team found him two days later on an island. Without the warning, he may have been stranded in the middle of the lake – Nikki

At the intersection near my house, I was about to turn light at the green and it was clear. But a voice, clear as day, stopped me and got me to take a second look only to see a big red truck passed by against the light – katied47fd64e0d

A spoon fell down next to us while I was walking with my friend and there was just nowhere it could have been thrown from. My friend is keeping the spoon now – ectobug

My brother had a friend named Ryan and during my high school, I think he was creepy. Five years later, I suddenly dreamed about him, out of the blue, where he followed me through a house and told me he’s been in jail because of me. Woke up and read the newspaper that Ryan had a court appearance that day – roethle111385

In my dream, I was sitting at my desk while my roommate was on her bed when a phone call came from mom. She said her ex-bf was dead and I woke up, telling about it to my roommate because it felt so real. A few weeks later, at the exact same setting, I got a real call from my mom who told me her ex-bf is dead. Really dead – anna11287

I have a sort of psychic connection with my father and to prove this, I once threw a tantrum as he was leaving for a business trip. I never did and he travels a lot, but on that very trip, he was trapped in a small village due to avalanche in Switzerland and a helicopter had to provide supplies – sbensonwv

A year ago, me and my husband I knew my grandpa was about to have his last moment. We stopped at my parents’ house to greet dad and brother-in-law when the lights went out suddenly at 6.55. We knew it and when we arrived our grandpa died at 6.55 pm – lauracaitlinjones

My girlfriend and I dreamed the day before we planned to go to IKEA that I died in an accident and were stuck in a car calling for help. It struck us as weird and scary when my mom called to tell us to dry carefully because she had a bad feeling about it. The next day, we saw the news on multiple-vehicle collision on the highway at the same time we planned to take – nightflamesaicina

Seven-year-old me once dreamed about going to Disneyland and that I rode something that flew over oceans, valleys, fields and orange trees. I could smell the orange and when I told mom, she said it sounded fun. Three years later, we went to California Adventure, rode Soaring Over California and passed the orange-tree part. We just stared at each other – squibell17

I had a nightmare that my pet parakeet died when I cam from school and I couldn’t shake it off my head. That day, I came home and immediately checked on her to see her dead in the exact same position – jennan413e32fbc

I dreamed about babysitting my neighbor’s son and the neighbor asked if I had the number to his PODIATRIST… three times. I woke up and got a call from my mother that said my little brother lost his state championship spelling bee because of the word ‘podiatrist’ – stellatum

When I was a teen, chilling in my room, I suddenly felt like my head hurt, but it didn’t like mine. It was from a friend and I knew something was wrong. I couldn’t reach her that day and called her family the next day. They told me that she was in a car accident that night, hit her head and she had to get staples for her scalp – corellianne

I once dreamed about an explosion and people falling from the sky and it all felt real. I woke startled and head a boom hours later. We looked into the sky and it was the Columbia space shuttle that exploded above us in Northern Texas – carlyecleveland

My husband had a panic attack when we were attending a church service in a small town in Oklahoma. He suddenly said we need to make an escape plan should a shooter walk in and for the rest of the service, I helped him calm down after moving near to the back of the church and made the strategy. His ears kept ringing and he looked over his shoulder, scared. After the service, the news mentioned about a mass shooting at a small church in Texas that happened at the exact same time my husband had his panic attack – Klaraadad

I was part of a traveling dance team and we’re about to perform at an amusement park. But that day, I felt this worry like I am going to get hurt this time and told my family. They said I was being dramatic and it was all cool until the finale. I slide my hip across the stage and was stabbed by a 3-inch-long piece of wood in my thigh. I got into urgent care, got it removed, and didn’t get to enjoy the park. But at east, the stage has been redone so no one will be hurt anymore – kyleeb458ddc16e

20. Should I have not asked about it?

Back in 2008, I was on a vacation with my family and my dad stayed for his job. While calling, the first thing I said was, “Did you lose your job?” He didn’t and wondered why I asked but I also didn’t understand why. The next day, everyone in the department was laid-off due to recession – anneo42f4e5e98