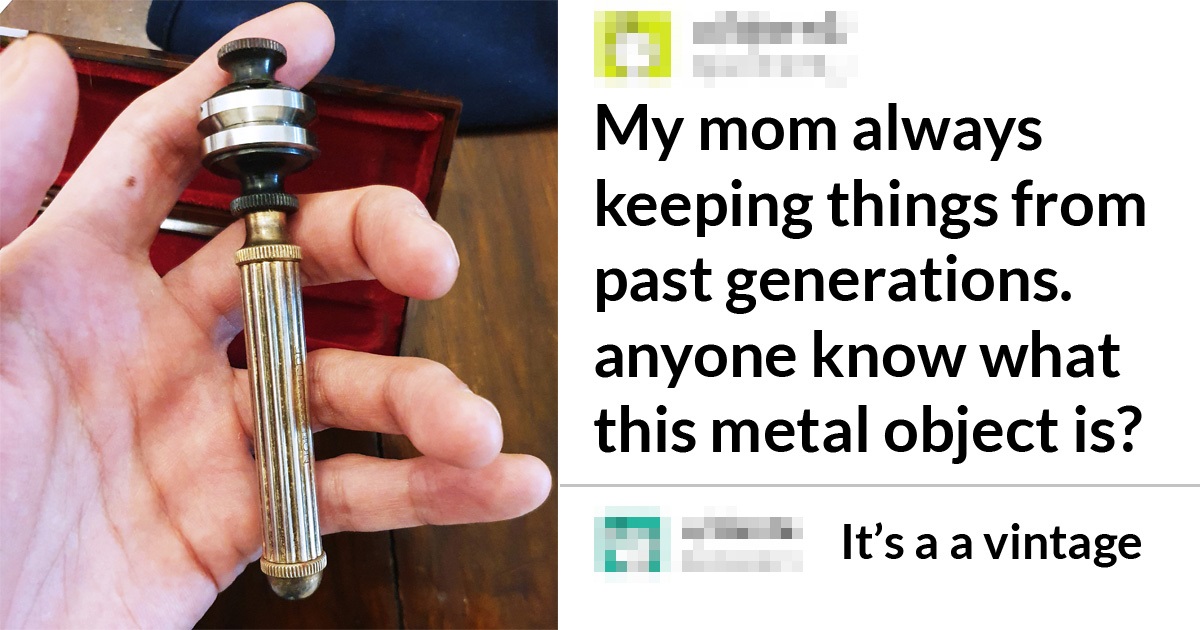 The ordinary life that people had from just 50 years ago is so different than today. They use tools that we don’t use anymore, leaving us wondering what exactly these things are when we discover them a few years later—a lot of the people who found these end up going to the internet to find answers.

One subreddit is dedicated to finding answers about things that people don’t know what they are for. It would be a great chance for you to see what these are before reading the answers.

“This is a Montessori Color Box, an educational tool for kids that teaches touch, colors, dexterity, organization, and how to clean up afterward. You should hold it by the wooden edges.”

“It’s a business card holder and displayer, and those are weights to keep them tight.”

Anyone know what this metal object is?

“A large machine in a residential neighborhood on the Oregon coast.”

“Found in an old cabinet, made entirely of glass with narrowing holes all the way through.”

“It’s a flower frog used to hold flower arrangements in a vase. It’s been made obsolete by foam and gel.”

You might be curious as to why the term ‘frog’ was used for these flower holders. The term is used interchangeably with flower holders, flower bricks, and flower blocks. The origin of the term was never known. Frog holders can also be found made of lead, pottery, glass, or bronze.

“Wooden Weiner dog, tail end is removable, body is hollow, is this more than a decoration?”

“It’s a novelty crayon or pencil holder. Essentially, it’s an old, hand-painted pencil box. Its back part is a lid. Here’s something similar.”

“This was found in an old toolshed. It’s made in Sweden by Bahco. Some sort of tool?”

“I believe it’s for pulling out nails back when they were square. My dad had one like 20 years ago. And Bahco still makes this particular model.”

“I found this room in an abandoned building. Can anyone tell me what this building may have been for and what these things hanging from the ceiling are?”

“It’s a miners’ changing room. The hooks and baskets lift their work clothes up and out of the way for the next shift.”

“Metal rod with ball and U shaped thing on the end. Has a wooden handle. Any ideas?”

This is a slide hammer for pulling and removing gears out of splines. It looks more like an old and specialized slide hammer. Use the 2 hooks to be put into anything and for pulling them out and then shake the metal ball against it as if you’re doing the opposite on a hammer or press.

“Possibly a kitchen item? Found in a bag of kitchen things. It can be compressed by gripping.”

“It’s a thing for marine activities and boating called a ‘shark clip’ or longline. It’s a very clever clip to attach things to a line like a buoy. Longline fishermen also use tons of these clips for connecting hooks lines to a long line.”

”What is this wooden ball with dice-like imprints?”

“It’s not wood. I’m pretty sure that’s a batting cage ball that has sat out for a long time and dried out.”

“What is this single-stringed instrument? I recently got it as a gift, and the seller apparently said it was from Morocco and made by a Tunisian craftsman, but I don’t know how accurate that is.”

“It’s a gusle. Many of them have goat heads on them.”

This is a bowed string instrument and is also called lahuta in Albanian. The way to play this is similar to playing the cello – you hold the gusle between your knees and use your main hand to hold the bow and the other to hold the strings. But unlike cello or violin, you don’t hold the strings all the way to the neck.

“Saw this at local school next to bike rack. What is it?”

“It’s a skateboard rack. Slide the board in and put a lock between the rings so it can’t be taken out.”

“Looks like an erhu to me. It’s an old, beat up Chinese fiddle (missing a string, tuning peg, and sound tube cover) for sure. That being said, the button does serve a purpose. It’s supposed to be used as a kind of guide for the string.”

”Found this in the store. It’s all made of wood, with 11 colors and 2 pieces each. May I know what it is for and what it does?”

“Found on a Pacifica beach, what is this?”

You’re looking at what was a red seaweed.

“Found this in the yard of an old farmhouse.”

“They’re cobbler’s pliers used to crimp down the nails that hold a steel horseshoe to the horses’ hooves.”

“Found in some old sewing supplies!”

“It is the third hand for sewing. The red string (and the fact that it was found with sewing things) is the key.”

How much do antiques cost? Some old things are really worthless, but there are also some that seem to be worth way more than the rust and yellowing surface it’s showing. The best way to know is to find an appraiser to tell you how much it’s worth. One of the most high-priced antique is the Pinner from Qing Dynasty which was fetched at the price of $80 million.

“Spotted in a Culver’s between the wall and a fridge.”

“It’s a bug trap. There’s a big glue trap behind the panel that traps flying bugs attracted by the light.”