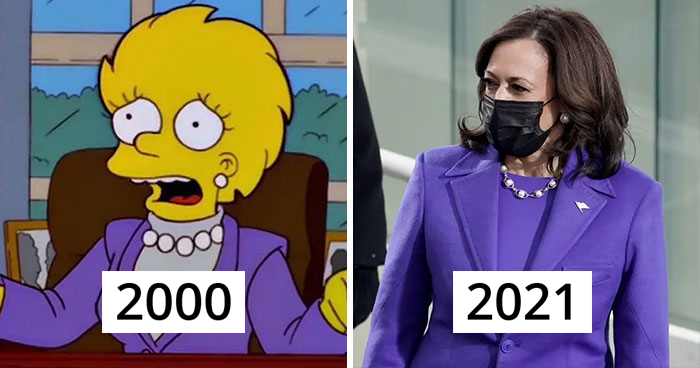 15 Times ‘The Simpsons’ Made Accurate Predictions About The Future

Nobody knows what the future holds, except ‘The Simpsons.’ They first got it right with the previous election’s winner. Now, they’ve got it accurate down to what Kamala Harris wears to the office. We’re pretty sure there might be some serious mumbo-jumbo going on in the creative section of this show.

For now, enjoy the 16 insanely accurate predictions that’ll make you rethink all your life decisions and start binging ‘The Simpsons’ for more relevant life lessons.

The existence of Higgs Boson was finally confirmed in 2012, which is a key answer to understanding the universe’s mass. But 14 years before this, Homer was the first to come up with an equation regarding the “God Particle” that solves the mass of a particle that wasn’t yet discovered.

In one of their episodes, Milhouse bet that Bengt Holmström would win the Nobel Prize, and he did six years later.

This may be one of the scariest predictions ever, with Johnny Bravo, who wrote the ‘Chain Gan Johnny’ episode in 2001, predicted the WTO disaster. It was written ‘Coming Soon,’ which convinced many people that this might have been a very subtle warning of the future.

Not to mention that before this, in 1997, Lisa showed a magazine that says ‘New York’, which cost $9 next to Twin Towers. Coincidence?

If you pay attention to this episode of The Simpsons in 1998, you’ll notice how 20th Century Fox was “a division of Walt Disney, Co.,” which is really the case when Disney bought out the company for $52.4 billion in 2017.

Albeit funny-looking. The Simpsons were pretty accurate in 1995 with the smartwatches years before Apple first released theirs.

It was on the episode ‘Lisa on Ice’ from 1994. Dolph was on the Apple Newton assistant, which autocorrected ‘Beat up Martin’ to ‘Eat up Martha,’ a sign of autocorrect hell that we all hate now. It wasn’t until 2005 when the actual program was launched, with the founders explicitly pointing out how this episode had been one of their favorite episodes.

If you hadn’t watched the ending, this is how it ended, a plot twist that pretty much angered a whole bunch of fans, predicted years ahead.

This fish that appeared in The Simpsons was quite the icon for the town’s polluted nature in the cartoon. It’s pretty unfortunate that such a fish was found in Argentina around a nuclear power plant area.

Lady Gaga performed on Super Bowl in a similar theme like The Simpsons render just five years ago in Springfield. She was suspended on air, singing, in a greyish-purple ensemble.

An episode in 2012 shows Homer as a news show guest. When the headline scrolls on, one of the reads, “Europe puts Greece on e-Bay.” It signifies the financial crisis Greece is currently in. Later in 2015, Greece took their third bailout from the EU and now owes a total of $330 billion.

In ‘Lisa’s Wedding,’ you can see a tall building that stood out, which looked like the Shard Building in London. The only curious part about this is that the episode aired 14 years before it was built.

Mauled by a white tiger.

10 years before the real incident happen, The Simpsons had already shown Siegfried and Roy getting mauled by their own white tiger.